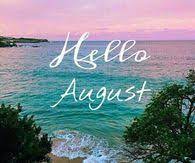 August is here and school is near!  Here are some fun facts about August.

August 1st is traditionally known as Lammas Day.  Lammas Day was a festival to mark the annual what and corn harvest.  It also marked the mid-point between summer solstice and autumn equinox.

August 11 marks the end of the Dog Days of Summer which began on July 3rd.

August 19 celebrates national Aviation Day.  Chosen for the birthday of Orville Wright who piloted the first recorded flight of a powered heavier-than-air machine in 1903.